Repost from a prior time..for Surname Saturday 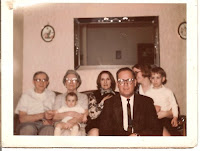 Several new ancestral surnames have bubbled to the surface for me in December.Most important for me I believe is what I have now deduced to be my paternal surname.
In November I wrote about my "Search for My Grandfather" an event which actually had propelled me into both genealogy and DNA in retirement. 'Holes' in a pedigree is what many of my genetic genealogy compatriots have in common and surely understand and I have written about that already.

With 209 current cousin matches on "Relative Finder" at 23andme, my closest matches are turning out to be from Norway. On this, the second exploration of my autosomal profile, but the first of the full genome ( all 23 chromosomes) a Baltic area native element like Saami continues to be evident.

Dad's stepfather Sigurd Boe twice alluded to being Dad's father in my hearing.My Dad, although he referred to his mother and stepfather as "my parents" was less sure of this fact and he legally was named Carrow after his Grandparents adopted him. Four years ago for the first time I received Dad's birth certificate naming "Louis Saybold" as the father but the document was stamped "illegitimate" and also gave his name as William Charles Carrow.

Yesterday I found a link from another Blogger of the Digital Archives of Norway. Grandpop Boe's death certificate as reported to the Norwegian consulate called him "Olaf Boe.His given name was Sigurd Boe and sure enough I find Ove Sigurd's birth and his confirmation as Ove Sigurd Boe in Bjarkoy Troms Norway.Thrilling to me of course!

His father is indicated as Oskar Ludvig Bremer {Oleson} and his mother Lorentse Sofie Kristiansdotr. His paternal grandfather is listed as both Lars Oleson Boe and Peder Oleson Boe which I suppose points to the patronymic of Olesen or 'son of Ole' and a place or origin name of Bo/Boe? I am not at all sure of that but I am sure it is him as he is born in Bjarkoy Troms as found in his first visa to the US in 1920.He seems to have retained his Norwegian citizenship although I know he received Social Security and a pension from a Philadelphia bank building where he was their operating engineer.