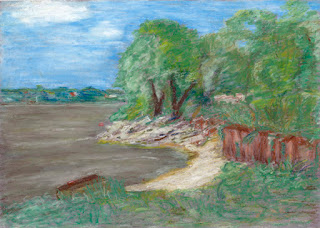 My Aunt Jean, Regina O'Donnell Faunt Biggio, is the last of my parents generation in my family.
When I visit in New Jersey during the year we try to spend a little time together.

This was my Christmas card to her, a giclee image of an oil pastel I drew this year.Aunt Jean was very excited about it and we talked about who used to live there and what it was like at that time.Houses were close to the Delaware River in the 1940s and 1950s but now it is just rivershore as seen in my drawing.

Aunt Jean said that the houses were mostly summer houses for people from the City ( Philadelphia to us).My Dad also grew up in a very small house on Risnor Row, sort of close to this.Risnor Row was almost North Shore, a term used to describe anything north of West Main Street,but not quite there. Borden Avenue called Borden Beach was almost on the North Shore and the Romanskys lived there.Aunt Jean and I both knew many of these families.

Her family lived there, Marion Shellenberger O'Donnell, with her children and her father Henry. Next door per the 1940 census was Ruben Maxwell  who was the census informant for the O'Donnells who were not at home.Nearby were her friends the Pagnottos, where she lived when she married my Uncle Francis Faunt.

She said she wants to ride up and look at it and I promised to send the photograph I took last fall.

We had a great chat and both were gossiping about people who lived many years ago, she who lived then and I who as the family genealogy nut has gathered this information.
Posted by kathlingram at 8:43 AM