Those Places Thursday- Delmarva from where exactly?

As I get older ( this week a milestone birthday) I am particularly interested in knowing where, perhaps 1,000 years ago, my ancestors lived. John Edenfield and William his brother who find their way to Kent County Delaware near Dover at their deaths. They are said to be born in Ovendon Yorkshire and their father and grandfather dies near Halifax Yorkshire 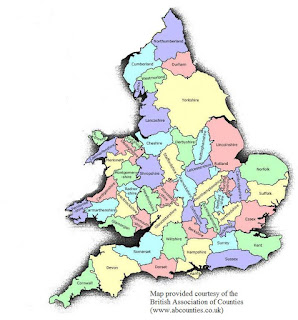 Rebecca  French Wilson who married  a cousin Thomas Wilson and was widowed then marries John Edenfield and becomes son-in-law to William Winsmore who had the estate called"Pipe Elm".

Rebecca's mother Elizabeth was a French who had children with her first husband Matthew Wilson and a daughter Mary with her 2nd husband William Winsmore a prominent planted and settler.

"Deposition. Christopher Cockram aged about 49 years being legally sworn, saith that about 23 years ago he did live then on the plantation that had been Thomas Willson's being pt/o a tr of land called Great Pipelm, then in possession of John Edenfield who intermarried Rebecca, widow & relict of Thomas Willson, & this deponent saith that about the time afsd there happened a difference about the bounds between Richard Nixon & the afsd John Edenfield who said that as Richard Nixon had possett on his land, that he would press & have his quantity of land out of the land of William Winsmore, who carried said John Edenfield unto a black oak standing near a swamp (sw from said tree, now dead, standing nw by n 21 ft from a white oak, this day marked by Samuel Galloway for Joshua Nickerson & George Hart & George Robisson parties concerned in order to perpetuate their bounds) & that said Wm Winsmore at the time, about 23 years ago, said in this deponent's hearing unto John Edenfield that the dead black oak before mentioned was the first bounded tree of his land & that he could not come any farther into his land & farther saith that said Wm Winsmore brought Benjamin Shurmer to survey the trs of land in dispute who begun the first butt at the black oak now dead, and further saith not. Before me Jno David. Attest. Jno Housman re " 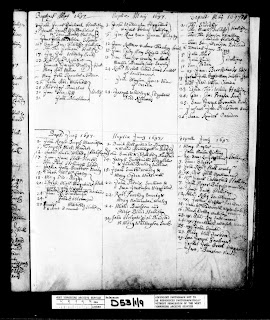 Posted by kathlingram at 6:32 AM