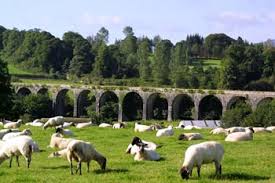 Apparently a few years ago a cousin contacted me whose ancestor Anna Kirwan Downey was sister to my Great Grandmother Sadie Kirwan Carrow. Sadie and Annie were daughters of Patrick Kirwan and Lizzie Sweeney. The Sweeny/Huey line is well documented in NJ and Leckpatrick Tyrone.
This 3rd cousin turned up on my AncestryDNA 2 months ago and also matches another person who is a 3rd cousin. Our common ancestral segment can be seen below on Chromosome #13. Cousin #3 has no known Kirwans or Sweeneys but her ancestry is known to her and is recent.She and I are the large 51.6 cm and the smaller 8 cM .


Cousins 4 and 5 also descend from Kerwins with the given name of Sylvester which is found in my Kirwans. They have an ancestral area of Carlow. So John McDermot my friendly Irish researcher and I put our heads together, and with some other clues (Patrick's 2nd marriage to a girl from Borris Knockroe) finally, 8 years after the fact have found Patrick's birth.

As he always said in documents his parents were Michael Kirwan and Jane/Jenny Kelly and they married and had 5 ( at least ) children in Borris Carlow between 1843 and 1855. Here is Patrick's birth from Parochial records: 27 Mar 1853-Pat,  Mick Kirwan &  Jane Kelly  with sponsors James Hickey & Maria Kirwan Knockroe.

Wait!! Not only do we not find Sylvester Kirwan/Kerwin in this happy little group but the DNA looks like what I am showing below so does not match with what the other 3 inherited.

Thankfully, Cousin 2 has now tested at my urging at 23andme and moved his Ancestry results into FTDNA and Gedmatch and cousins 3,4 and 5 are at Gedmatch and FTDNA where these results are from.

My moral here is that despite BIG matches and common geographic locations we do not always know our DNA ancestors for sure, although we see that we are related.

Thanks to an informative series of posts this weekend at ISOGG and with some insight from an abstract posted by Debbie Kennett, I am realizing that  I have miles to go before we solve this mystery. The abstract had to do with how many genetic relatives we might have in common and all of these cousins seem to share more than one other family with me and each other. How many? It remains to be seen.