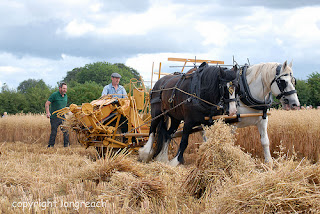 Yesterday, thanks to a price reduction at Roots Ireland.ie I was able to locate the death certificates for Patrick Kirwan's father Michael and his grandfather Sylvester. They lived in Ladyrath Rathkenny Meath and Moynalty Meath , an unknown county for me.


Patrick Kirwan was my father's Great grandfather who he knew well.. He took Patrick as his confirmation name. Pat, according to my Dad had a wooden leg. I assume this from a runaway wagon accident which cost him his wife and newborn baby in June 1890. He was a liveryman for the town of Swedesboro. Patrick's wife Lizzie Sweeney delivered a daughter, Maggie, prematurely from the anxiety of Pat's runaway accident. Lizzie died a few days after the delivery and Maggie within the month.

Sarah "Sadie" Kirwan was my great grandmother,she was very young when her mother died. Patrick
apparently found another wife Mary Murray, from Carlow Ireland at some point. They have a daughter Katherine born in 1893. I find Mary and Patrick with Sadie, Sylvester and Katie in the 1900 census and Pat and Mary with Sylvester in 1910. Sylvester dies of TB I believe in 1912. At some point after that Mary and Patrick do not seem to live together but continue to state they are married until their deaths. 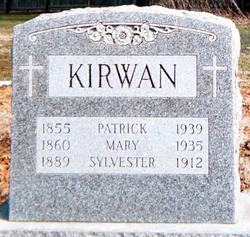 Pat was immersed in a murder trial on circumstantial evidence in Swedesboro somewhere around 1894. He and a man named Delaney Armstrong were accused of murdering a man named Gans. A body had washed up on the Delaware shoreline which was declared to be his. Kirwan and Armstrong were last in his company and had argued with him. The public defender did not believe the men were guilty but the trail went on.

At the end of the trial, amazingly enough, the actual body of Mr. Gans washed up on the shore. He had drowned. There were no marks on his body, his clothes were identified as were documents on his person. Patrick and Delaney Armstrong were freed.

Mary Kirwan, his wife was at his side during the trial although it was noted that they were legally separated. They reconciled after the trial and apparently lived together until 1910 or so. Patrick's last residence was in New Jersey in 1930 and he dies in 1939 in the State Hospital in Trenton. They are interred together in Montgomery County PA. with Patrick's only son Sylvester.

I suspect that Pat may not have been the ideal husband although I do not know that. Possibly just a few bad breaks, the "luck of the Irish", he might have said.