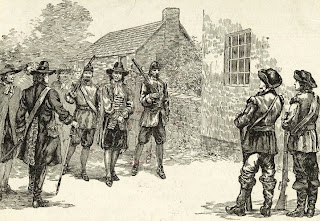 Accomac County Court records shed light on many many people who come into the Colonies between 1664 and later. I go there first to look for immigrants. An original Virginia county "Accawmak"  was formed in 1634 and renamed Northampton County in 1642-43. In 1663 Northampton was divided with the  northern part receiving the original name. At the court held April 16, 1664 ,Col. Edmund Scarborough declared that "Most of the county was present".

The land grants received in this court itemize a huge percentage of immigrants coming into the New World.
Jon Carrow is found in a land grant to Captain Samuel Matthews in 1643 but odds are that he is present several years before this, possibly as early as 1635. We find another John Carrew here at this time, one we claim as ours. He is Constable in 1667 and Evan Carrew is Deputy Constable around that same time.

Maryland records indicate Evan coming into St. Mary's in 1671 and he works as an accountant. However, many do not realize he is here in Accomac prior to that. I find it significant that a Rowland Carrew  is found as a headright the same year we first see Evan appear.Evan Carrew does not appear as a headright until 1671 in Maryland. He appears 15 July 1667 in Accomac Court being summoned to give testimony and that same month he is paid 100 pounds in tobacco to replace Henry Stott as Constable. He apparently is known to the community. It seems likely that he and John Carrow are born in Virginia, possibly to Jon. Carrow here by 1635 when most shipping stops until 1643.

Rowland Carrew is found this one time in records. What clues can I get from this? Where is he born? Where are others who seem to arrive with him from?

I start with Thomas Miller who gets land for bringing him in. Miller may sell  250 acres of it again in October 1669 to Abijah Manlove daughter of Mark Manlove. He had had this land assigned to him by a William Green just prior to him so perhaps he did not actually transport these men. Headrights are used as cash in that time and that economy. The land in question was called Green's Chance. William Green apparently transported himself and his son John from Virginia to Maryland for some of this land.


Thomas Miller, acting governor, Council member, secretary, and customs collector, was in North Carolina (then called Albemarle) by 1 Mar. 1672/73.On that date he contracted for shipment of a large quantity of tobacco from Albermarle  to England and for his own passage.In his contract Miller was identified as an apothecary of "Balley Samson in the County of Waxford in Ireland." In other documents related to the shipment, he was identified as a merchant. He seems to have had a fair education and to have had influential connections with the with the Lords Proprietor of Carolinas whom he apparently was associated as early as 1669. His behavior, however, did not reflect gentle birth. He was given to vulgar, offensive remarks, and as an official he was abusive and domineering.

Interesting to me is the fact that this Thomas Miller may have  received land in Virginia August 1667 for transporting Rowland Carrew, Morgan Aprice,Edgar Jones,Mary Morgan, John Welsh and Eliza Wilkins. This transaction and these names are found only in Accomac County Court records. Did Rowland Carrew end up in Carolina? Did Thomas Miller actually transport Carrew  and Aprice or did William Green?

Three Morgan Aprice's are found in historical records at this time,all in the West Country in England: Hereford, Shropshire and Wiltshire not far from Bristol.  All of these may be clues to the Carrows and their origin place. A strong tip is that almost all men named Evan or Rowland at this time are Cornish or from the West Country near to Wales.